Prisons have “struggled to cope” with record rates of suicide and self-harm among inmates following cuts to funding and staff numbers, the public spending watchdog has said. The National Audit Office said it remains unclear how the authorities will meet aims for improving prisoners’ mental health or get value for money because of a lack of relevant data.

Auditors said that self-harm incidents increased by 73% between 2012 and 2016 to 40,161, while the 120 self-inflicted deaths in prison in 2016 was the highest figure on record and almost double that for 2012. Since 2010, when David Cameron became prime minister, funding of offender management has been reduced by 13%, while staff numbers have been cut by 30%, the report said.

“Prisons have struggled to cope with reduced resources. When prisons are short-staffed, governors run restricted regimes where prisoners spend more of the day in their cells, making it more challenging for prisoners to access mental health services,” the report concluded.

The report covered prisons in England and Wales, although issues around healthcare are devolved, so the NAO examined only health services provided in England. 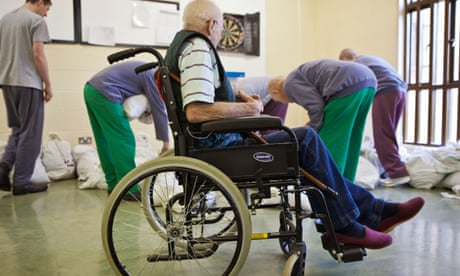 NAO chief Sir Amyas Morse said: “Improving the mental health of those in prison will require a step change in effort and resources. The quality of clinical care is generally good for those who can access it, but the rise in prisoner suicide and self-harm suggests a decline in mental health and wellbeing overall.

“The data on how many people in prison have mental health problems and how much government is spending to address this is poor. Consequently, government do not know the base they are starting from, what they need to improve, or how realistic it is for them to meet their objectives. Without this understanding, it is hard to see how government can be achieving value for money.”

The report noted that the prison system was “under considerable pressure, making it more difficult to manage prisoners’ mental wellbeing”, but acknowledged that the government had promised an “ambitious reform programme” to address this.

The National Offender Management Service (Noms), which was replaced by HM Prison and Probation Service (HMPPS) in April, had suffered funding cuts of 13% from 2009 to 2017, the NAO said, with a 30% fall in staff numbers in jails over the same period.

Responsibility for mentally unwell prisoners should fall upon the Ministry of Justice, HMPPS, Department of Health, NHS England and Public Health England, the report said. The NAO also noted delays in transferring inmates to secure hospitals for treatment; just 34% of eligible prisoners were transferred within the 14-day target in 2016-17.

Peter Dawson, director of the Prison Reform Trust, said the report showed a familiar tale of admirable policy objectives not being delivered on the ground. “This report makes horribly clear that our prisons are holding very many people who will suffer disproportionate and unnecessary harm because of the prison environment.”

Lib Dem health spokesman Norman Lamb called for a legal maximum time between diagnosis and transfer for prisoners who need hospital treatment. He said: “The mental health crisis is threatening the very fabric of our prisons. Too many prisoners with serious mental health problems are being allowed to slip through the cracks, often with tragic consequences.”

A government spokesperson said support available to vulnerable offenders had increased, including investment in specialist mental health training for prison officers. “We’re putting more funding into prison safety and have launched a suicide and self-harm reduction project to address the increase in self-inflicted deaths and self-harm in our prisons.

“But we recognise that more can be done and continue to work in partnership with HMPPS, NHS England and Public Health England to improve mental health services for offenders at all points of the criminal justice system,” the spokesperson said.