Nine new prisons will open in England and Wales – five by 2020 – under plans to close “Victorian” jails and sell them for housing, the government says.

The new sites have not been decided but about 10,000 inmates will be moved in a bid to save about £80m a year.

The plans form part of the chancellor’s spending review, due on 25 November.

There is speculation that Pentonville in north London might be closed, while the Ministry of Justice says Reading, which shut in 2013, is on the market.

Chancellor George Osborne said many prisons are outdated “relics from Victorian times” that stand on “prime real estate”. He said modern prisons that were better suited to the rehabilitation of inmates would be built instead.

New prisons are cheaper to run and easier to equip with the training and work facilities needed to help the rehabilitation of offenders.

In addition to the nine new jails, a prison is currently being built in Wrexham and expansions are taking place at HMP Stocken, in Rutland, and HMP Rye Hill, in Warwickshire.

More than 3,000 new homes could be built on the city centre sites of the old prisons, the government said.

Grade II-listed HMP Reading was built in 1844. The Treasury announcement of its sale comes just a month after Reading Borough Council was told by the Ministry of Justice that the prison would be retained “in case of contingencies”.

Other possible London candidates for closure include Wormwood Scrubs, Wandsworth and Brixton. Meanwhile, Leeds, Manchester and Liverpool are old jails which are known to be very expensive to run.

The MoJ said Blundeston Prison in Suffolk is also up for sale, while contracts have already been exchanged for Bulwood Hall, in Essex. Both sites have been closed since 2013. 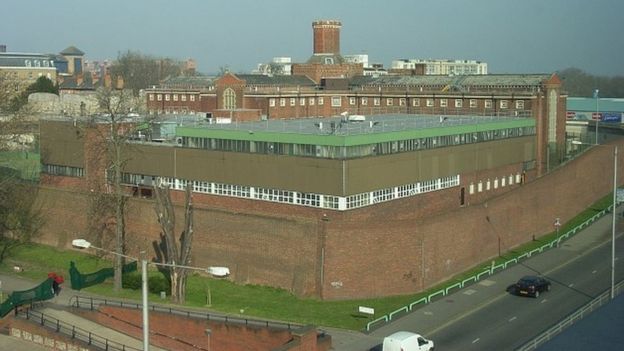 The MoJ said no decision has been made about future development on six other sites already closed – Wellingborough in Northamptonshire; Camp Hill on the Isle of Wight; Blantyre House, Kent; Downview in Surrey, and the former immigration removal centres in Dover and at Haslar in Hampshire. At present, they all remain available in case there is an urgent need for prison accommodation.

The MoJ also used its announcement to confirm that the lease on Dartmoor prison, in Devon, would not be renewed.

The feasibility of the government’s plans depends largely on the size of the prison population, which is notoriously hard to predict.

There’s no sign that the population is falling – it’s currently 85,884 although it’s not rising as fast as predicted a year ago.

As for the closures, it’s been long speculated that Pentonville in north London, which was heavily criticised by inspectors, might be closed.

Leeds, Manchester and Liverpool are old jails which are known to be very expensive to run. Dartmoor Prison has already been earmarked for closure.

As well as Reading, several jails are currently unused and could be sold off, including Dover, which was until recently an immigration removal centre, and Downview Prison, in Surrey, which was a women’s prison.

The chancellor and Justice Secretary Michael Gove made the announcement ahead of a visit to Brixton prison in south London.

Mr Gove said: “We will be able to design out the dark corners which too often facilitate violence and drug-taking.

“And we will be able to build a prison estate which allows prisoners to be rehabilitated, so they turn away from crime.”

In July, chief inspector of prisons Nick Hardwick said in his annual report that jails in England and Wales were in their worst state for 10 years, with increasing violence.

Responding to the Treasury announcement, shadow justice secretary Lord Falconer said “too many of our prisons are not fit for purpose”.

He added: “We have heard similar promises before and the coalition government ended up selling high-performing prisons and increasing pressure on an already over-crowded system.”

She called on the government to look at increases in sentence lengths, mental health care in prisons, the treatment for drug addiction, and dealing with binge drinking.

Mark Icke, from the Prison Governors’ Association, welcomed the plans but said it was important to have a “whole look and whole fresh approach about how we treat people in custody”.

« Week of Action: Day Six – Yarl’s Wood
This is only the beginning: Overview of the Week of Action against the Prison Industrial Complex November 2015 »