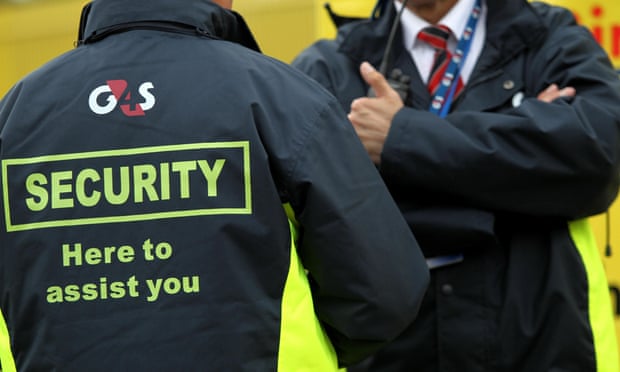 Seven staff at a G4S-run young offender institution have been suspended after allegations concerning the use of unnecessary force, including claims that staff punched and slapped teenagers.

The private security company has confirmed that seven members of staff, including training centre assistants, team leaders and two duty operation managers, have been suspended at Medway secure training centre in Kent.

Kent police have launched an investigation into the allegations, which also involve claims that staff deliberately concealed their actions and used foul language to frighten and intimidate youngsters.

The Youth Justice Board (YJB) has temporarily stopped placing children at the centre, which can hold up to 76 young offenders aged 12-18.

A G4S spokesman said the employees were suspended on 30 December after written allegations were received from BBC Panorama, which had been engaged in undercover filming at Medway STC for a programme that has yet to be broadcast.

The allegations, understood to date from incidents last autumn, include:

• That staff punched a youngster in the ribs and that another was slapped several times on the head.

• Staff are alleged to have pressed heavily on the necks of young people and unnecessarily used restraint techniques, including squeezing a teenager’s windpipe so that he had difficulty breathing.

• Staff used foul language to frighten and intimidate youngsters and boasted of mistreating young people, including using a fork to stab one in the leg.

• Staff tried to conceal their behaviour by ensuring they were beneath the line of sight of CCTV cameras or in areas not covered by them.

Paul Cook, the managing director for G4S children’s services, said: “We are treating the allegations with the utmost gravity and have taken immediate action to suspend a number of staff members who are alleged to have conducted themselves in a manner which is not in line with our standards.

“We take any allegations of unacceptable or inappropriate behaviour extremely seriously and are giving our full support and cooperation to the local authority designated officer for safeguarding children and the police as the investigation moves forward.”

Lin Hinnigan of the YJB, which commissions places at the detention facility, said: “The safety and wellbeing of children and young people in custody is paramount for the YJB, which is why immediate steps have been taken to safeguard those who are at Medway STC. We have increased our own monitoring activity and the presence of our independent advocacy service, delivered by Barnardo’s.”

Kent police have confirmed they are investigating the allegations.

The suspension of staff at Medway follows the announcement last month of the departure of two staff at G4S’s Rainsbrook STC, near Rugby, after being involved in incidents of serious misconduct.

The private security company lost its Rainsbrook contract in September after more than 16 years running the centre, following an Ofsted report that disclosed that children had been subjected to degrading treatment and racist comments by staff.

Responding to the disclosures, Deborah Coles, co-director of Inquest, a charity that advises people bereaved by deaths in custody and detention, said: “That it took undercover filming to reveal the mistreatment of imprisoned children points to the culpable failure of monitoring and oversight by the YJB and G4S. In any other setting this would be viewed as child abuse.

“What is so shocking is that the abuse of children continues 12 years after the deaths of 14-year-old Adam Rickwood and 15-year-old Gareth Myatt following the use of force and promises of fundamental change. This points to a lack of accountability and culture of impunity. It is clear these institutions are incapable of reform and must be closed down.”

The Corporate Greed of Strangers

« Film – Can there be justice without punishment?
Tear Down the Walls in Birmingham »