Another article highlighting how the British Government have no intention of reducing the number of people in prison.

It is possible to implement prison reform without reducing the number of prisoners, Michael Gove has insisted in an interview with the Guardian in which he said political tensions over his position on the EU will not derail his programme of reforms. 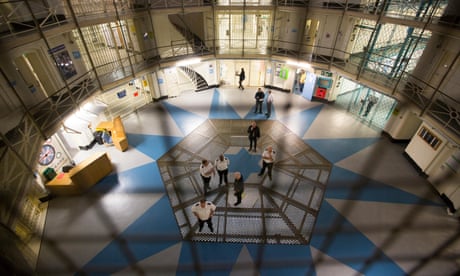 The justice secretary said there was no need to “manage down the prison population” or to introduce an “artificial target” to reduce the number of prisoners, revealing that the Treasury had promised him sufficient funding to “keep prison numbers stable” despite wider pressures on the public finances.

The revelation sits uneasily with Gove’s new image as a champion of penal reform and will disappoint campaigners, who say a radical reduction in prisoner numbers – which have risen from 45,000 in 1990 to almost 86,000 today – must be central to reform.

Until now, the justice secretary has avoided the politically sensitive question of the rising prison population in the handful of speeches he has made on reform. David Cameron also sidestepped the issue when he made a speech on the need for a “truly 21st-century prison system” last month.

But Gove rejected the “view that says it is only possible to rehabilitate if you dramatically reduce the prison population”.

“If you were to be seen to be artificially attempting to manage the population down, I think it would have a harmful effect on the criminal justice system overall,” he said in an interview with the Guardian after it published two reports about problems at the country’s biggest and most overcrowded prisons, Oakwood and Wandsworth. 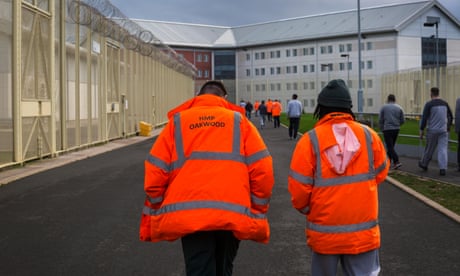 Gove may be anxious to avoid the criticism faced by his predecessor but one, Kenneth Clarke, who described the prison population in 2010 as astonishing and made a commitment to reduce numbers by 3,000 in four years. He subsequently faced widespread attacks from rightwing newspapers (the Sun described him as “soft on the causers of crime”) and was moved out of his post in a reshuffle in 2012 before reductions were made.

Gove said: “I’m confident that we can keep people in safe and decent circumstances in prisons which are at or near capacity without needing to manage down the population.”

The justice secretary added that he was confident his decision to come out in favour of Britain leaving the EU in this June’s referendum had not dampened Cameron’s support for his prison reforms. “Notwithstanding the fact that we are going to have a referendum, we have a prime minister who is leading the way on prison reform, who made a brave and compelling case for the need to change.

“We have momentum and support and money in order to reform our prisons. Whatever the importance of that issue [EU membership], the government is going to carry on reforming in this area as it is in others,” he said.

Reformers have called for a review of sentencing policy, hoping that Gove would curtail some of the longer mandatory sentences set down by governments over the past two decades, but he indicated this was not a priority. “Of course I would like fewer people in prison because that means fewer people are committing crime, but I don’t think that we should deliberately shape sentencing policy with the sole aim of reducing the prison population,” he said.

With cuts of more than 20% already made to the prison budget, leading to widespread staff cuts, reformers argue that the best way to reduce costs and improve the system is to reduce both the number of people sent to prison and the amount of time they spend there.

Rather than reducing numbers, Gove hopes to reform prison regimes, placing greater emphasis on education and meaningful activity, but he acknowledged that the sweeping changes he envisaged would take time to deliver, and that new initiatives such as “problem-solving courts” and “reform prisons” needed time to be tested before being rolled out widely.

“I would like to see a significant increase in the amount of time that prisoners spend out of their cells, working, learning – but we need to do so in a way that each individual institution is kept safe. I’m going to carry on pushing for these changes, but I’m realistic about the fact that we can’t always make all the changes that we’d like, at the pace I’d like,” he said.

However, immediate and radical reform was needed to the way women prisoners are treated, he said, adding that the death of Sarah Reed, the victim of a notorious police brutality case who was found dead in her cell at Holloway prison in January, had convinced him that the “current model that we have for dealing with female offenders is deeply flawed”.

Speaking for the first time about Reed’s death, and directing his comments to her family, he said: “It is impossible for me to say anything that will bring comfort to someone who has lost someone that they love. All that I would say is that I am very conscious that we need to do a far better job for women who find themselves in the criminal justice system.”

Gove announced the closure of Holloway in November, indicating that the land would be sold for redevelopment into flats, soon after Reed was sent there on remand. She had been suffering from serious mental health issues and spent large chunks of time in hospital. Her family are angry that someone so vulnerable was sent to prison.

Gove said there needed to be a more sympathetic approach to many female offenders. “One of the reasons that we closed Holloway was that I wanted as much as possible to move away from some of the ways we have treated women offenders in the past and find a much more appropriate and sympathetic way of dealing with people, many of whom have had tragic lives,” Gove said.

Commenting on the rise in self-harm (up by 24% on last year) and violence (up 30%) in prisons, he said some of this was linked to the widespread availability of legal highs in prison. It was harder to explain the rise of suicides in prison (last year, 89 people killed themselves in prisons in England and Wales).

“It is very, very difficult to point to one factor that is driving it. But we need to change the ways prisons are run; you’ve got to try to create institutions where relationships are strengthened.

“I don’t know in each individual case what factors will have led someone to take their own life, but I do believe that you can make prisons better and healthier institutions by allowing the people who work in them the opportunity to develop stronger relationships and build self-confidence and build a sense of opportunity and possibility in [prisoners’] lives.”

But the justice secretary acknowledged that staffing cuts and rising prisoner numbers had made it difficult for officers to spend time helping prisoners in this way. “The amount of time that staff will spend with individual prisoners is less than ideal,” he said, citing complaints from officers about the issue. “In an ideal world we would be able to ensure that staff spend more time with prisoners.”

He rejected campaigners’ description of the prison system being in crisis. “I don’t find the use of the word crisis helpful because I think it paralyses us. I won’t deny the difficulty of the situation that we’re in, but we’ve got to take steps we believe are correct as fast as we possibly can, without tipping ourselves into an unwise and precipitative solution,” he said.

“I won’t deny for a moment that it is an incredibly tough and demanding job. It is certainly the case that people would love to have additional resource and flexibility, but you have to work within the four corners of what we have inherited. Within that, it would be wrong to despair and think that there is nothing that can be done,” he said.