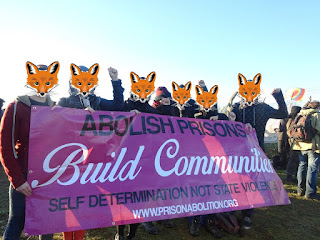 A new prison has been on the cards for north Wales for quite some time. Prisoners from Welsh speaking areas are incarcerated in England where the language and culture is different, families have to spend large sums of money and travel for hours to visit loved ones in prison. Why then as someone who has and has had relatives and freinds incarcerated in English prisons, do I oppose this Mega-Prison being built in north Wales?

Aside from the issues that plauge mega-prisons in terms of their awful conditions, as a prison abolitionist I don’t belive that prisons solve any social problems or make our communities any safer . The prison propulation is on the rise, between June 1993 and June 2012 the prison population in England and Wales increased by 41,800 prisoners to over 86,000 and the numbers are still rising.

By expanding these violent, coercive spaces it looks like prison is fast becoming a money making industry where act of putting people in cages is something government burocrats & buissnes men and women are making a killing from. The Wrexham prison will be able to hold 2100 prisoners and will be the second biggest in Europe. Lend Lease (who happen to be Tory party donors) have won the contract for building the prison whitch is now currently being built.

Prisons are inherently classist, racist, sexist, spaces. As more and more people run out of options as the slither of security the welfare system once provided us is being quickly pulled out from under our feet, more people turn to “crime” to survive, and so more and more people are imprisoned. The homless and vunerable are being criminalised more and more with many councills introducing draconian anti-homless policies all over the UK including Newport. With homlessness now at record levels, more and more poor people now are at risk of being caged.

With prisoners being forced to work or be banged up 22 hours a day, or have no money to buy decent food and little things like tobacco and toiletries if they refuse, prisons are fast becoming 21centuary workhouses. The average weekly “wage” for a prisoner is around what the hourly minimum wage for one hour’s work is outside of prison.

The USA is able to compete with nations in the global south (like Mexico) in areas like manufacturing because of this industry of prison labour that means there is slave labour readily available to capitalists in supposedly “first world” countries. Due to the fact that big money can be made from prisons, the expansion of prison in the US has meant that that is the country where most peopel are incarcerated in the world. This is what is called the prison induatraial complex 1% of the population of the US is behind bars, that’s 1 in every 100 person!

With Mega-Prisons such as Wrexham prison being built and the recent announcemnt that the government will build 9 new Mega Prisons in the UK it seems that we are freefalling deeper into the grip of the self perpetuiating Prison Induatrial Complex in the UK.

The Wrexham prison will have whole factories inside of them to provide capitalists with virtually free labour. Every year the prison population rises in the UK,  and there is a higher proportion of people of colour incarcerated in British prisons than even US prisons. The prison system here is as rascist as it is in the USA and who knows what prison expansion could mean for comunities of colour in the UK?  The emergence of the mega-prison in the UK is yet another symptom of the creeping prison society and the prison industrial complex.

For Welsh prisoners, the price of being incarcerated closer to their families and suposeldy in a place where they wont face the same prejudice based on language and culture will indeed be very high if historic and contemporary lessons from the horrendus conditions of large prisons such as this across the globe are anything to go by.

The question is, will there actually be these benefits for Welsh prisoners? The answer is; no. To start with, even if the prison is built, there is no guarantee that prisoners in north Wales will be sent there. Prisoners are not incarcerated in places of their choice or where would be continent for their families and friends to visit them but are shipped out all over the UK regardless of there they are from and where they committed the crime.

Secondly of all is the cultural and linguistic aspect. Due to it’s sheer scale and the fact that those running the prison will probably have no idea about the situation, the staff and prisoners in the Wrexham prison will be from the north of England, no doubt about it. How those who advocate this prison can think that by the prison phsically being in Wales that the problems in terms of constant language rights violations will be prevented are naïve.

Lastly if this was not enough how about the affect it will have on Wrexham. People are hoping it will bring a boost to the local economy and jobs. Firstly like all pet projects of the English elite in Wales, the work will not go to local people. Even if it did, would the people of Wrexham take pride in the fact that many work as screws? Having a day to day job where your work is to constantly coerce another human being? To be the one holding them hostage for the state and keeping them from their parents, their children, their loved ones? This is nothing to be proud of, and it’s the kind of work any decent person could do without. Being a screw is to betray your class for a meeger wage and the power trip of controlling other people as part of a web of social control.

This prison is bad news for Wrexham, bad news for Wales and bad news for working class people across the UK as the emergence of a disturbing new trend in prison expansion. However people will not stand by while their communities are being incarcerated. In the last week of August 2015 Reclaim the Fields held an action camp in Wrexham where numerous actions against the prison took place over the course of the week including the act of blocking entrances to the prison building site and halting construction for the day. More recently in December there was a Week of Action against the Wrexham Prison where numerous actions against the Prison took place across the UK and one action in Sydney Australia. Before this local people had lobbied against the prison for over five years.

People are fighting prison expansion in their all way using a diversity of tactics. Get together with those you trust and either get in touch with the CAPE Campaign or make your own plans where you live to take action against the prison system. For information on companies tied up with the Wrexham Prison project near you take a look at this company list, they ar all over England and Wales – if there is no obvious targets near you, just get creative and imagine how your group can oppose the prison industrial complex.

The campaign against the Wrexham prison does not end in north Wales. By fighting this Mega-Prison we are opposing the trend in the UK immiataing the US prison sytem, opening Europe up to an acceleration of the prison industrial complex where the poor are put in cages and all that was fought for when we won the minimum wage is strewn away with forced prison labour. This is a reality with the new plans to build 9 new prisons and here’s the response to this news by activists. Wrexham is at the frontline of this battle against prison expansion in the UK and the success of the campaign opposing it will have a knock on effect onto the plans for futrther prison expansion. So much is at stake – join the stuggle against the Wrexham Prison and the Prison Industrial Complex.