Posted by prisonab      02 October 2015
On his visit to Jamaica this week, instead of addressing widening calls for historical reparations, David Cameron announced plans for a UK-funded prison on the island to transfer Jamaican offenders from the UK. Luke de Noronha examines the wider context. 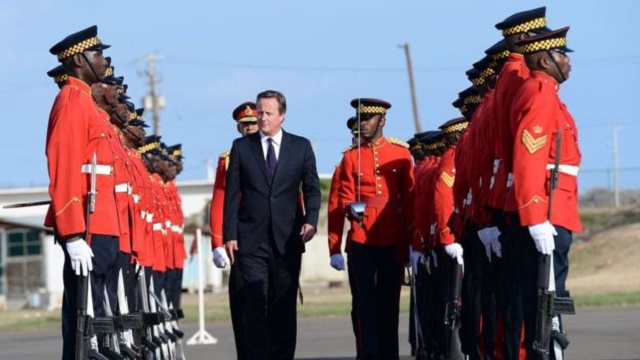 David Cameron greeted by an honour guard at the airport in Kingston. (Source: PA)

David Cameron’s visit to Jamaica this week promised to be an interesting one, with calls for reparations ringing loud across the island. But as Cameron landed – amid this animated conversation on the histories of slavery and colonialism, and their effects in defining the present – his script had already been written: ‘reparations are not the right approach, we should focus on the future’.

Well, what kind of future does he envisage? It turns out what Cameron really wanted to discuss was the building of a prison on the island. According to the BBC, the UK will contribute 40% of the costs of building a 1,500 person capacity prison. There are estimated to be around 600 Jamaican citizens in British prisons, and the hope is that when this new prison is built in Jamaica, these offenders will simply be transferred. This agreement does not come out of the blue; the British government have been pushing Jamaica and Nigeria to build new prisons – with British financial assistance – for years. The problem for the UK, at the moment, is that prison conditions in Jamaica are so dire that prisoners facing transfer would likely be able to successfully resist it on human rights grounds. The solution then: build shiny, ‘modern’ prisons so that ‘foreign criminals’ can be sent home to serve their sentences.

We should remember, though, that this prison agreement is just one part of Britain’s approach to the problem of ‘foreign criminals’. Since 2006, following the ‘foreign national prisoner crisis’ – in which Charles Clarke was sacked as Home Secretary – ‘foreign criminals’ have been central to debates about immigration. They are subject to aggressive censure in the Tabloid press, and represent a new ‘folk devil’ – one to be contained, excluded and expelled.

In 2014, the National Audit Office highlighted that the number of ‘foreign criminals’ being deported was not increasing year on year, despite an increase in resources for this purpose. The mainstream media condemned the government for their inaction and chided ‘liberal judges’ who were ‘letting these monsters stay’. The figure of the ‘foreign criminal who cannot be deported’ is a central trope in British tabloids, and one that demands radical forms of state action for its resolution.

The government has responded to this narrative in a number of ways. Theresa May promised to ‘deport criminals first, and hear their appeals later’. While this policy has now been widened to cover all non-refugee cases – a devastating move for thousands of people in need of assistance – it was the ‘foreign criminal’ who lent this policy its urgency and legitimacy. The Home Office has also instituted a partnership with the police, to ensure people who are arrested have their immigration status checked in police stations, thus bringing immigration control into the heart of police work. Operation Nexus, as this partnership has been termed, also seeks to pursue the deportation of those who could not be convicted in a criminal court, yet who the government believes to be dangerous. Under this Operation, people are being deported for ‘non-convictions’, subjected to a ‘balance of probabilities’, and deported on suspicion alone.

It is also important to note that calls to scrap the Human Rights Act are concerned, above all, with ‘the foreign criminal who cannot be deported’. With the Conservative government setting out their plans for a Bill of Rights – trying to steer a course between continuing Britain’s ‘long history of respecting human rights at home…and abroad’, and assuaging the profoundly illiberal anti-EU brigade – it seems the key selling point of the Bill is that it would grant the UK the ability to deport ‘foreign criminals’ more easily.

It is important, then, that we situate this proposed prison in Jamaica in its wider context, in reference to the other policies designed to ease the removal of those deemed ‘criminal’. Transferring prisoners erodes the rights of individuals to appeal their removal, and to assert their rights to family life. Yet policy changes have already denied non-citizen offenders the substantive right of appeal. Equally, Article 8 claims  – appeals to the right to respect for family and private life – are increasingly difficult to lodge successfully, due to changes in the wording by which judges must weigh up the right to family life against the public interest in deportation. So the prisoner transfer agreements do not do anything wholly new; they are yet another means of denying ‘foreign criminals’ the right of appeal against removal. However, they do initiate deportation sooner – and thus render removal more effective and final. Moreover, given that many deportees report stigma, alienation, even violence upon return to Jamaica – can the British guarantee the welfare of prisoners who will be serving British sentences in Jamaican prisons?

Who are these ‘foreign criminals’?

With all these changes afoot, it is important that we know who these policies affect. ‘Foreign criminals’ often do not define themselves as migrants and are unlikely to embrace their description as ‘foreign’. Many have spent most of their lives in the UK. David Cameron claims that the building of this prison ensures that Jamaican criminals will be sent ‘home’ to serve their sentences. But home is often Lambeth, Handsworth or Old Trafford.

Formal citizenship and experiences of belonging do not always cohere, as I have discovered in conversations with ex-offenders deported from the UK to Jamaica.

Many of the deported persons I have met lived in the UK for over ten years, built lives for themselves, started families, picked up regional British accents, and began to call the UK home. When they are forcibly returned, many land with a few tenuous family links at best, some with none at all. Some have to be housed in homeless shelters, others rely on the charity of family members back in the UK. They return to a country they hardly remember, or one that has changed beyond their recognition. I have spoken to two people who lived in the UK for over 40 years, one man from the age of 9 until he was deported at 55. Others move as young children and end up getting deported in their late teens and twenties. In fact there is no reason under British law why somebody born in the UK cannot be deported to the country of their citizenship (Britain ceased granting citizenship by birth in 1981).

Whether the UK deports these individuals post-sentence, following lengthy legal battles, or via smooth prisoner transfer agreements, the injustice is grave. Many return to isolation, unemployment, uncertainty and the aching loss of family life, a home, and a sense of one’s place in the world.

Beyond the theoretical conclusions one can draw from this reality – about migration control, criminal justice, identity, race/racism, belonging, and citizenship – the most striking and simple observation is the sadness of it all. The cruelness of deportation.

Yet, detached from these ruptured lives, David Cameron celebrates another diplomatic ‘mission accomplished’, a new prison for those unruly Jamaicans who dared misbehave on the motherland. Prisoner transfers and deportations are legitimated through calls to foreignness, yet the lives of those who are affected by these policies belie easy distinctions between citizens and non-citizens. In other words, ‘foreign criminals’ often don’t always appear that foreign.

As one young man told me, he has only taken two flights in his life. The first, a flight to England to join his mother, aged 15. The second, and perhaps his final: a flight to Jamaica, in which he was restrained in handcuffs on a chartered plane from the UK, in November 2014. With tens of other black men, handcuffed to their seats, escorted by security agents, he was flown, against his will, to a country in which he had no support or resources. If this image does not feel uncomfortable, then we really are in a place where historical amnesia rules. A place where wrenching somebody from their home is a matter of justice for the ‘British tax-payer’, where bodies and lives are forcibly transported to honour racially inscribed citizenship policies, and where, ultimately, deportations are celebrated while reparations are ridiculed.

Luke de Noronha is a doctoral candidate in Anthropology at the University of Oxford (COMPAS). His research explores the deportation of ex-offenders from the UK to Jamaica. He is on Twitter @LukeEdeNoronha.
Topics: Articles, Jamaica, Prison Expansion, Prison Industrial Complex      Tags: jamaica, prison abolition, prison expansion, prison industrial complex