Kevan Thakrar is an IWW member and miscarriage of justice who has served over a decade in prison. He was moved to the Close Supervision Centre at HMP Whitemoor in Cambridgeshire in July and is now being subjected to an even more repressive regime, as well as targeted harassment from prison officers.

Kevan repeatedly challenges his conditions and captivity with complaints and legal challenges, many often against prisoner officers and members of the Prison Officers Association. In retaliation, the Prison Officers Association have been actively encouraging officers to try to get Kevan moved to a different prison. Staff have been trying provoke an incident after Kevan’s requests for them to wear body-worn cameras (for his own protection, following incidents of physical violence inflicted against Kevan in the past).

On Thursday 16th August, Kevan was put on an even more brutal regime. He is now locked up 23 hours a day. He has 30mins outside and 30mins to shower, make phone calls or do anything else he needs to do. When he is unlocked, everyone else in the CSC is locked in. This is creating animosity between the prisoners (a desired effect for the officers).

Kevan has requested to see the Governor and has so far been refused. His planned meeting with the prison’s Diversity Officer was also refused by the Governor.

Close Supervision Centres are designed to break human beings. Most people leave and enter psychiatric custody following what they are subjected to. Kirsty White, head of the CSC unit has told Kevan the reason for his restricted regime is that Kevan’s PTSD is being triggered and that he is clearly “distressed” because he is asking for body-worn cameras. Kevan developed PTSD after experiencing extreme racial, physical and sexual abuse at HMP Frankland in 2010.

Kevan has been fighting for his life as a miscarriage of justice for the past 11 years. Learn about his case. He has been kept in solitary confinement for over 8 years. You can read more about his experience in prison here.

What you can do

1. Please contact the Head Governor Will Styles at HMP Whitemoor:

Or contact him via the Ministry of Justice: https://contact-moj.dsd.io/correspondence/topic

3. Write to the MP of the area, Steve Barclay: http://stevebarclay.net/contact/

Write to Kevan! He needs your support and solidarity. Send letters to:

You can also use emailaprisoner.com 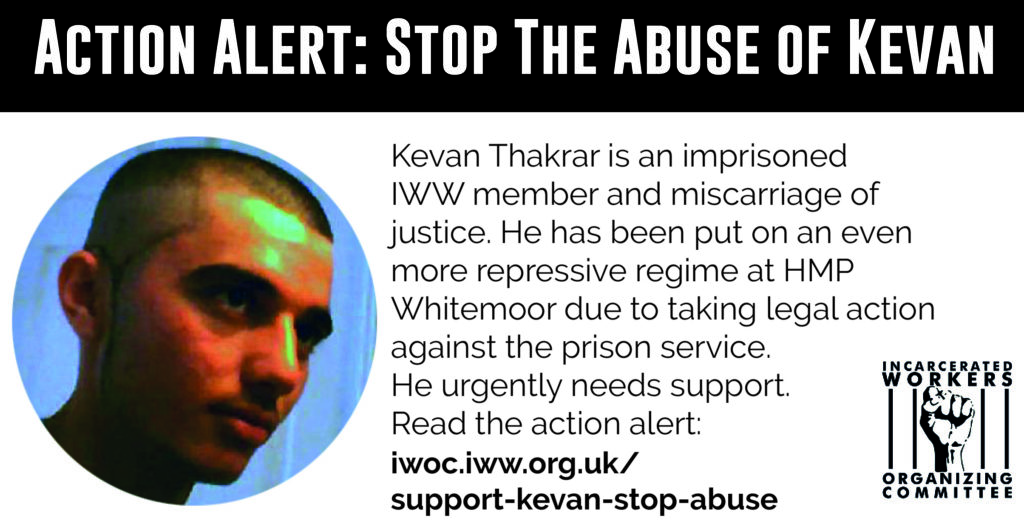 « Week of International Support in Lead Up to Nationwide Prison Strike
Taking a Global View of Repression: The Prison Strike and the Week of Solidarity with Anarchist Prisoners »