Guardian: Tales from the inside: drugs and disorder at G4S’s prison of the future

Guardian: Tales from the inside: drugs and disorder at G4S’s prison of the future

Posted by prisonab      30 April 2014
Oakwood was to be the blueprint for a new generation of big, cheap jails, yet it has been slated by inspectors and prisoners, who say inexperienced staff are failing to keep control 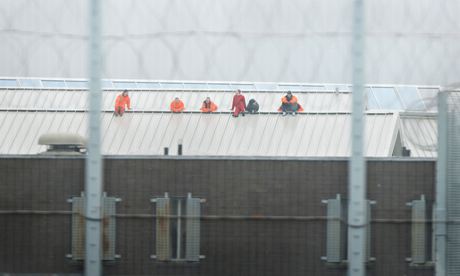 The vision for HMP Oakwood was certainly ambitious. When the super-sized prison opened in spring 2012, government ministers heralded it as the blueprint for a new generation of money-saving jumbo jails.

G4S, the security company awarded the contract to manage Oakwood, claimed that within five years the south Staffordshire prison could be the most successful in the world, a place where prisoners were inspired to become “the best they can be” and a safe, rewarding environment for staff.

But two years on, that aspiration seems a long way off. Some who know the jail from the inside largely paint a depressing picture. They see Oakwood, near Wolverhampton, as a place where inexperienced staff clash with prisoners, where drugs and alcohol are more easily come by than education courses, and where vital services are hard to access.

One of a number of prisoners who spoke to the Guardian this month gave a damning verdict: “I’ve been in jails all over the country,” said Kev. “But this was the worst. It’s a shit-hole staffed by kids who should be stacking shelves.”

Kev, who spent 13 months in “Jokewood”, as he claimed the prisoners call it, said the “pads [cells] are good but the rest of it is ridiculous”, adding that drugs and alcohol were rife. “It’s easy to get hooch, even easier to get Black Mamba [synthetic cannabis]. The parcels are chucked over the fence” 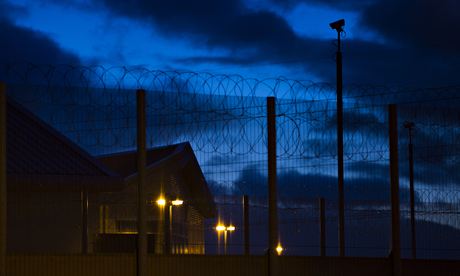 CCTV cameras at HMP Oakwood at Featherstone, West Midlands, where parcels of forbidden goods, like drugs, are throw over the fence.One G4S employee, who spoke on condition of anonymity, said staff inexperience left them at a disadvantage with prisoners.

Oakwood, a category C men’s prison with a capacity of 1,605, had a highly critical inspection report last year and since then has seen a string of violent incidents including one disturbance – or riot, depending whose definition is accepted.

Figures seen by the Guardian show staff leaving at worryingly high levels, and higher sick leave than most jails in England and Wales. Government figures released in April revealed more than 600 incidents of self-harm in Oakwood in 2013. “Urgent” mental health referrals can take 48 hours – and routine ones five weeks.

G4S and the Prison Service insist Oakwood is improving. The company says it is exceeding its delivery indicators, staff are becoming more confident and prisoners happier. Undoubtedly, there are good things about Oakwood. Cells have phones, showers, televisions and underfloor heating. Staff wear name badges. But the bottom line is that it is cheap. In 2013-14 the cost of keeping a prisoner in normal conditions at Oakwood was expected to be £12,000 a year against £22,420 for the average equivalent jail.

Some experts worry this is a false economy. They fear the men that leave – including sex offenders, currently about 320 – are likely to commit more offences because they have not undergone rehabilitation. A recent report from the National Audit Office said prisoners tended to be more engaged in smaller jails, and more modest establishments consistently did better in performance ratings and inspections.

The debate is an important one. While Oakwood staff work to keep control, construction is beginning 50 miles away in Wrexham to build the UK’s biggest prison, for up to 2,100 men. It is due to open in 2017 – the year G4S hopes Oakwood will be the best prison on earth. Kev laughed at the idea that Oakwood could become a world-class facility.

“One day there were two new screws on together in charge of 60 men. They were asking me what to do to keep order. They hadn’t got a clue.”

Access to healthcare is also said to be a problem, though G4S dispute this. Kev claimed it took three months to get a doctor’s appointment. “By that time you’re better or really ill.”

He said Oakwood was a “dumping ground” for troublesome prisoners and claimed staff downgraded his status from category B to C so they could shift him to Oakwood less than two months after he deliberately scalded someone. He finds the official G4S description of the disturbance at Oakwood in January as a “low-level” incident of “concerted indiscipline” laughable. “It was a riot. Simple as that. Cedar block was trashed. And there’ll be worse there unless the government steps in and sorts it out.”

Critics of jumbo jails say that because there are fewer of them, they are often a long way from inmates’ homes, making it hard for families to visit. Kev is from north-east England, 170 miles from Oakwood. He had had no family visits.

Another criticism is that there are not enough rehabilitation and education courses to give prisoners a fresh start. Kev, who was jailed for burglary, said: “You’re just banged up for most of the day with fuck-all to do.” He said that during his time at Oakwood he did not even meet his offender manager, whose job is to help prepare prisoners for release. “Everyone knows it’s all about money. Oakwood is cheap, that’s all they care about.”

Paul, from Coventry, served six weeks in Oakwood this spring. He said Oakwood’s mainly young staff won’t – or can’t – solve the problems. “They have no experience, it’s like talking to someone in a supermarket. They just refer you to managers, who you never see.”

The testimonies of Kev, Paul and other prisoners have to be treated with caution. But their claims chime closely with the findings of official reports. Last year the chief inspector of prisons, Nick Hardwick, concluded there was too much violence and drug and alcohol use. Prisoners told inspectors: “You can get drugs here but not soap.”

Inspectors found health services were “very poor” and, according to the latest Ministry of Justice figures, there were 611 incidents of self-harm at Oakwood last year. The only adult male jail in England and Wales with a higher figure was Altcourse in Merseyside, another G4S-run prison, with 889. In contrast, there were only 81 and 56 self-harm incidents respectively in Wormwood Scrubs and Wandsworth, publicly run jails of a similar size to Oakwood.

Jerry Petherick, managing director for G4S custodial and detention services, said any new big establishment endured “birth pangs”. He pointed out that Parc, another large prison run by G4S, in south Wales, was criticised when it opened 15 years ago but just received a glowing report from the inspectorate.

Petherick, who has 32 years’ experience in the public and private prison sectors, said he not recognise the picture painted by the recently released inmates. “I’m seeing a much more respectful, confident group of staff and prisoners,” he said.

There are signs of improvement. G4S has, at its own expense, invested in more CCTV cameras and bolstered its perimeter fence to try to stop drug “throw-overs”. In the first three months of 2014, 5% of mandatory drug tests on prisoners were positive, against the 10% target. Petherick said Oakwood was now exceeding its weekly target of 24 hours of activities (work and education) for each prisoner. Last April prisoners made 832 complaints; this was down to 226 in February.

He said access to a doctor was as good, if not better, than outside the prison, and he did not believe staff sickness levels were higher in Oakwood than elsewhere. There was bound to be a high turnover of staff in the early days of a new prison, he said.

Petherick’s position that there are “challenges” when opening a new jail was echoed by a Prison Service spokesperson, who said: “Oakwood is improving and we continue to work closely with G4S to build on that progress.

“We need a modern prison estate that addresses our stubbornly high reoffending rates. That is why we are working with organisations from the public and private sectors to streamline services, and replace old and inefficient places with a new generation of prisons.”

G4S have warned staff against talking to the media, the Guardian was told. One of the few who agreed to speak anonymously said this was his first prison job, though he had worked in the security industry for some years. “I think it has been a culture shock for many of us who haven’t worked in prisons before. It’s taken time for me to puzzle out how it all works, how you deal with prisoners. The thing is they know the rules, the form, better than we do. Which puts us at a disadvantage.”

Figures obtained by the shadow justice secretary, Sadiq Khan, give an insight into the staffing problems. On average 15 sick days were taken by Oakwood staff in 2012-13 compared with an average of 10.5 across prisons in England and Wales. Staff turnover last year was at 15% – higher than at almost every public-sector jail. 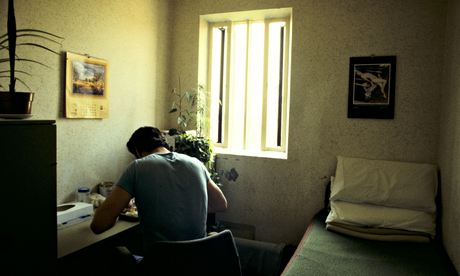 A cell at Featherstone prison, where staff-prisoner relationships and the quality of educations and work on offer were praised in a recent report. Photograph: Mike Abrahams / Alamy/AlamyG4S says Oakwood’s problems are replicated in prisons across the country. The publicly run Brinsford young offender institution, a few hundred metres from Oakwood, last week received a scathing report from Hardwick, who said it was the worst jail he’d seen as chief inspector. On the other hand, in March the prisons inspectorate published a positive report on Featherstone, the third jail on the Oakwood site, praising the “generally good staff-prisoner relationships” and the “quality and quantity of work and education” on offer.Not surprisingly, the presence of three jails here with a total capacity of almost 3,000 puts pressure on local residents.

Frank Beardsmore of South Staffordshire council said he was not convinced things were improving at Oakwood and that G4S lost credibility when it played down incidents such as the January disturbance. “My understanding is that it was a riot, simple as that. The concern is that G4S isn’t open about what goes on because it is concerned about its share price.”

Barry Pickering, a retired Featherstone officer who lives on the edge of the Oakwood complex, is unconvinced giant jails are the way to go. “When I was an officer it was all about building personal relationships. I don’t think you can do that in a gigantic place like Oakwood.” But he does not hark back to a golden age of prisons.

“We’ve had prison hulks and sent criminals to Australia. We’ve had Victorian jails when it was all about keeping prisoners in isolation. I don’t think we’ve ever got it right.”